Our Secret Sauce for Building the Ultimate Logo System 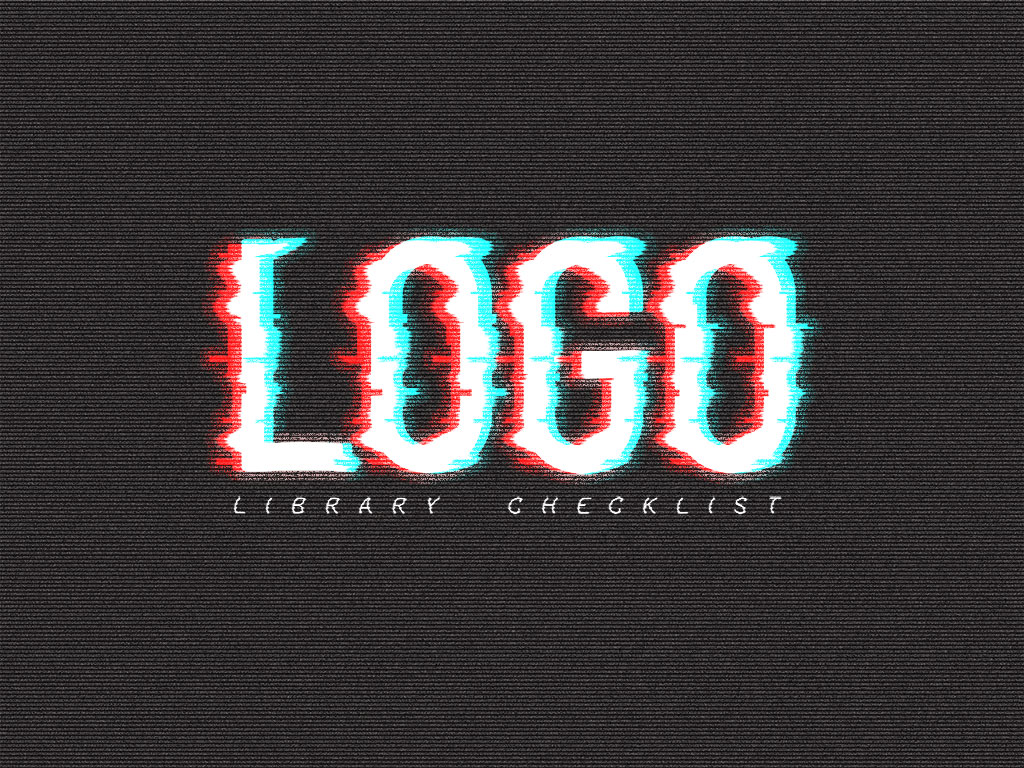 We hate to be the bearer of bad news, but logo design is not the ‘cruise control’ phase for business owners.

On Instagram, branding always seems like a hop and a skip away. You’re told just “hire a logo designer” or “DIY your brand yourself.” Like anything on social media, though, not everything is as smooth sailing as it may appear.

Before you hire a designer, you must have a general understanding of industry standards, or you risk walking away with a set of logos that are unusable or a hot mess. But don’t worry. We’re here to demystify this complex process, so you can confidently contact a logo designer knowing the quality of service and files you’re entitled to.

As a new business owner, you’ve finally reached the ‘kick my feet up’ checkpoint. You’ve successfully got grandma and hubby to agree on a business name. You’ve incorporated the business, hired an accountant, built a thorough business plan — you did all the things and more. So all that’s next is finding a logo designer, and you can take a timeout until the finish line. Correct? Ah, if only it were that easy.

You see, too often, we hear of logo horror stories:

Clients having strict access to low-res PNG formats only.

Businesses missing black and white versions of their logo.

The list goes on and on. Whenever we hear stories like these, it breaks our hearts because clients should feel empowered by their logo, not hindered by it.

Let’s be real here. Logos are not cheap. They are a valuable and integral investment, so it’s pivotal that you have full access to the very element that represents the face of your entire business.

Whether you are a ‘ma and pa’ shop or an established enterprise, we firmly believe that you should have full access to your entire collection of brand assets. That’s why we’ve created this thorough checklist:

But before we give away our secret sauce for building out this ultimate logo package, let’s cover some logo fundamentals first.

What is a Logo Library?

Whether you’re Mr. Startup or Ms. Seasoned Expert, it’s never too early or too late to set yourself up with a Fully-Loaded Logo Package. We’ve all heard, “you need a logo to be successful in this digital era.” What we don’t hear enough of is “you actually need an extensive brand system to really reap the benefits of having a logo in the first place.” Anything less than a streamlined system, and all you have is a folder full of random files — resulting in limiting navigation and a decrease in productivity for your business.

You see, a logo should be more than a mark that just “looks pretty.” Don’t get us wrong; visual aesthetics are necessary, but a logo should also aid a business’s productivity and growth. If all you walk away with is a folder filled with a smorgasbord of files, you can guarantee that your logo is not serving your business to the level that it should.

Think of your Logo Library as the App Store of branding. When you have a specific problem to solve, you confidently know that you will find an app that can accommodate. Like the App Store, your Logo Library should function no differently. You should be able to run to your brand assets, knowing that you’ve got a toolkit of logos to integrate into any design project.

What are the Perks of Having a Full Logo Library?

Having your logo clearly labelled and organized by its usage will result in functional navigation and user-friendly accessibility. Your employees, team, and remote contract workers can then focus on the pressing business tasks like answering those emails or making those phone calls.

Having a Logo Library will Save your Business Time and Money

With a ‘set it and forget it’ system, you no longer have to waste time begging for specialized logo exports from your designer. Whether you need a die-cut postcard or branded billboard, you will have full access to your logo prepared for print and web usages.

Gone are the days of feeling constrained by your brand. By having a set of tailored logos, your business will have all the building blocks to develop strong brand awareness across all media. Not only does this system provide transparent flexibility, but it can reliably serve your needs as your business grows, expands, and evolves over time.

Here is a deep dive into the breakdown of what your Logo Library should include and why.

You want to make sure that your brand is visually consistent across all media. Your logo should be available in CMYK/Pantone inks (for printed projects) and RGB color spaces (for web presentations). You can find this information by checking the file name at the top of the window within Illustrator or Photoshop programs. You can also find this information using the finder window. Select the file and press ‘command’ + ‘i’ for iMacs and Macbooks.

To ensure consistency and accuracy across print (Pantone/CMYK) and web (RGB) platforms, design settings must be customized for the intended use. This is why you must have access to all of your logos in Pantone, CMYK, and RGB colour profiles. By having a collection of calibrated logos, you will avoid color displaying incorrectly or inaccurately.

There is a bit more to it than just a few color settings, though. So let us explain the magic behind color production a little further.

Unlike Pantones (pure color inks), many variables can influence the output of a CMYK swatch, such as humidity, printer technology, and choice of ink brand. This is because CMYK swatches are created using a microdot formula system to produce color. A percentage of each ink color (Cyan, Magenta, Yellow, and Black) is printed as a series of dots, and together, they formulate an image when each color layer overlaps the other. Think of this process as technologically-refined pointillism.

Like CMYK inks, RGB images are produced using a similar dot system. Instead of using Cyan, Magenta, Yellow, and Black inks, RGB files digitally layer Red, Green, and Blue pixel channels upon one another using light. When each channel layer overlaps the other, it collectively results in the formation of an image or color swatch. 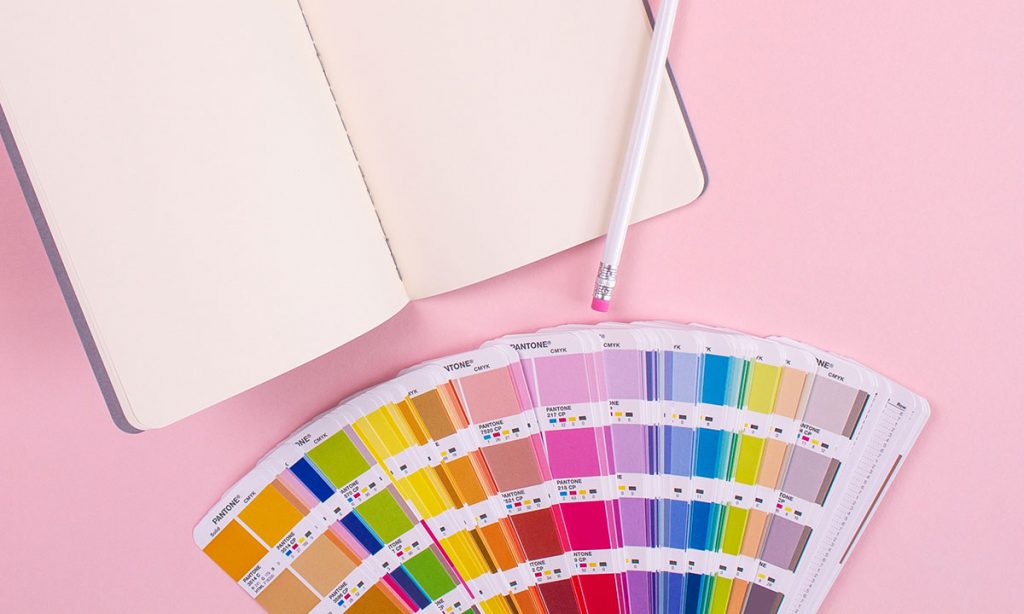 Although full-color logos can add value to a brand’s identity, solid 1-color logos are pivotal to creating a successful visual identity. There are many reasons for this:

In summary, it is a must-have that your logo is exported as a:

Logo File Formats You Should Have

You will hands-down always need access to your logo in vector format as it is the original working file for a logo’s creation. Vector artwork can be enlarged to any size and is seamlessly editable. They are essential for most design and print projects. You will often run into designers and printers requesting your logo in the following vector formats:

Another staple in a Logo Library is having your logo available in raster format. Since rasterized images are built out of pixels, they cannot be enlarged and are not editable. Raster images are essential for digital/web usage and are great for file-size conservation. Your web designer or social media assistant will often request your logo in the following rasterized formats: 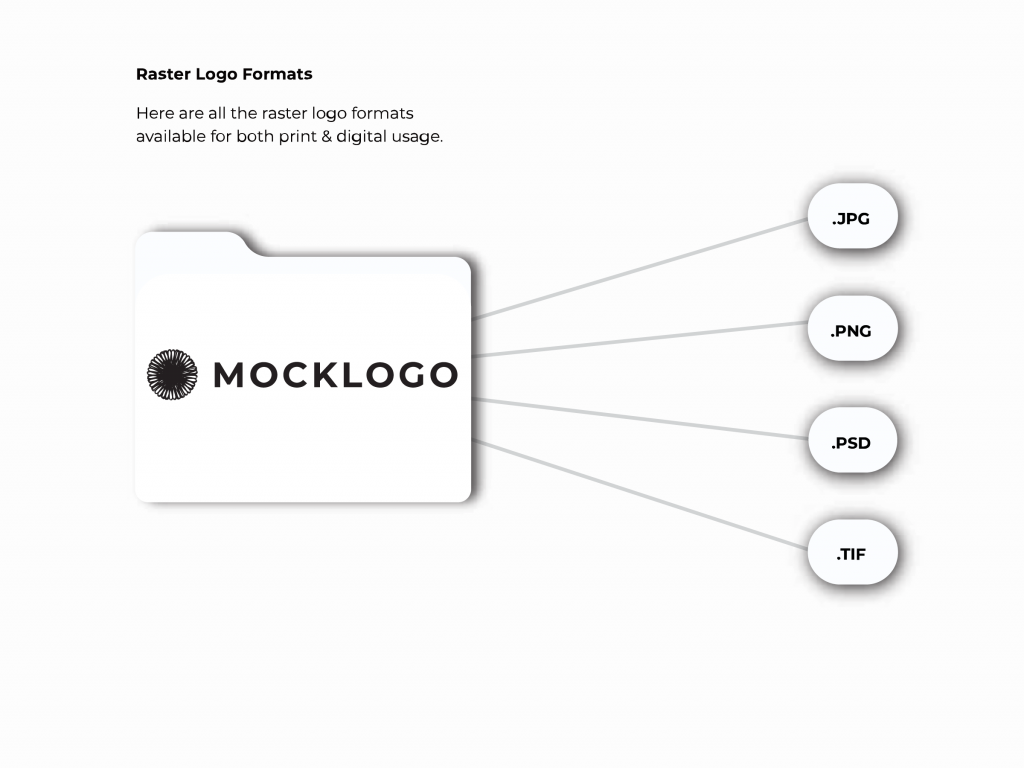 Your logo should flexibly pivot across a variety of print and web platforms, ratios, and dimensions. A successful Logo Library will provide access to all logo layouts in both vector and raster formats.

Secondary logo layouts should be used for materials where the brand is clearly defined, or brand awareness has already been established. Think social media, apparel, and swag.

We know what you’re thinking, “this all sounds great, but what does this logo library structure actually look like?” Don’t worry. Our printable Logo Library Checklist Sheet and downloadable Logo Library Folder System will walk you through all the details. For now, here is a breakdown of our recommended folder structure for creating the ultimate logo package: